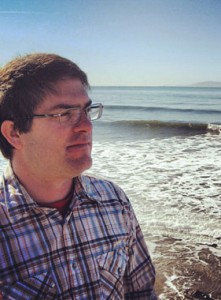 About Josh
Josh Catalfo was born and raised in California and has produced Club Josh since 1995. He attended UC Davis where he received his BA in Physical Geography. A thirst to learn more about the cultures and the people of the world, has sent Josh around the world with his Gorn action figure taking photos.

Josh has been a cartographer, surveyor, web designer, site developer, project manager, ride operator, and guest service manager. He has many hobbies and passions including photography, movies, popular culture, hazards geography, and cars. Josh basically tries to keep up with the goings on in the world, especially when there is a natural disaster.

Mr. Catalfo currently is driving a 2018 Subaru Crosstrek and hopes to once again get a BMW Z3 in the future.

The Story of Club Josh
I started Club Josh the web site back in 1995, quite simply, because I was egged on by people at work and I really wanted to have my own page on the then brand-new world wide web. It was really taking off, despite the fact that most people had just a 14.4 or 28.8 modem (56k didn’t hit until a few years later – weren’t we lucky??).

I started with just a simple text page with some backgrounds and then over time added more and more content. As the years progressed, my interest and time available to keep up the site has waxed and waned. I think the peak in terms of diversity of pages was in 1998 or so and it was in 1999 when I moved to clubjosh.com that content started dropping off the site (mostly as a necessity as upkeep became burdensome).

The advent of a “Daily Update” in 2000 pre-dated most blogs, but sadly I was never prolific enough to make it more than just a hobby. One thing that has remained constant: My Gorn Page, which started in 1995, still receives new pictures whenever I travel. I also still write a travel diary whenever I travel. It’s usually posted on my regular Daily Update blog, and is now in it’s own Trip Diaries blog. One day, I will integrate photos into the travel blog completing a vision I have had for over 15 years. In 2014, I committed to an entry a day and with the exception of a week in October was successful. I managed to keep it up until March 2015. I hold out hope I can do it again..

What does the future hold? I don’t really know. It is my dream that Club Josh will outlive me, and I just hope that when it does, certain pages of the site won’t still be showing a last updated date back in the 1990’s!!
–Josh 5/28/2015

Current Sections of Club Josh
Index: Most Recent Daily Updates and Twitter Entries and Links to Sub Pages
The Gorn Page: World Travels of an Action Figure (a 1995 original)
Trip Diaries: Later addition – Trip Diaries from the Late ’90s to today as well as links to my travel photos. This site swallowed the separate Disneyland Paris site when I moved to the new server and still causes a bunch of 404 errors from sites that have not updated since the 1990’s. Today it is missing my Disney photos, and I still haven’t decided if I will bring them back or not.
Jarrepalooza: Small Corner of the site that contains my Jean Michel Jarre collection – dates from the mid ’90s and recently updated
Doingworld: A place holder site. Used to have a mapping project from College here, but now its a landing page.
Club House: Basically the About page, but fancier. Launched in 2002 and not much was done with it until 2011. Used to link to old party photos and such.
What’s New Archive: All of the changes to the site dating back to 1995 for all the different versions (Mobile, Lite, PDA, Web)
Evolution: What the home page has looked like through the years. I only wish I still had the code for the older versions!!

Archive Sections of Club Josh
Long gone, but not forgotten sections of the site
Movie Czar Reel Reviews: I used to write Movie Reviews and send them via email to my friends. I actually won awards for them.
Charo’s Party Pics: The forerunner of Charo.info, a small section that had photos from Cuchi-Cuchi Hawaiian Style
Friends and Family Photos: This section was the first to have my party photos in it and eventually led to the Club House after years of not being online. Now, most of these photos are not online, but a select few were revived on my Flickr site.
SeaGranite Video Archive: Back in the 1990s, I had my complete video collection listed with my notes for each movie. Seemed like a good idea at the time
Guestbook: Remember when web sites had Guestbooks??
Statistics: Remember when web sites had Hit Counters??
Resume: Remember when people just put their Resume online with all their contact information?
Cyber Surfin’ Safari: A list of web links when bookmarks where a thing.

The views and opinions expressed on this web site are mine and do not necessarily represent or reflect those of The Walt Disney Company, Edmunds.com, or any other employer not specifically named here. Basically, this site is about Josh and Josh’s opinions and no one else. Any sites linked to do not count as an endorsement of any kind and should not be taken seriously under any circumstances.

Privacy Policy
We don’t store or track anything you do on this website. I do use Google Analytics and the Charo site does have some Amazon ads for Charo merchandise. Those sites have their own separate privacy policies and I recommend you read their own policies.