OK so I lied 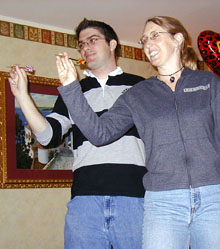 A great time was had by all in the first ever Anti-Valentine’s Day on the road in Las Vegas. Vegas veterans and newbies alike found something to enjoy from strolling through the casinos singing “Luck Be the Lady Tonight”, riding the Star Trek Experience with Ensign Thomas, gazing over Southern Nevada from the top of the Stratosphere, and listening to the Pink Panther theme played on the Bellagio fountains. We also had a good time back at the Suncoast Hotel and Casino, our lodging for the weekend. The casino featured a bowling alley and a movie theater. We were going to do Cosmic Bowling, but instead went up on Sunday night where Susie and Wendy each won a game. I scored a respectable 126 in the second game, despite completing the first frame with a grand total of 1 pin.

I promise to post the pictures soon. I need to get a version of Gallery up and running in the Club House format and then post some other pictures I have been neglecting to post. I also seem to have misplaced my Smart Media reader for my desktop, but I am sure it is around here somewhere.

Back at the park, I finally was able to operate the new and improved Carrousel as well as ride on the Matterhorn. Both are improved and different experiences than before. I still prefer the old Carrousel, but I did get a thrill as my old spiels came back to me. I am still nervous about my early shift on Saturday for my update at the Matterhorn. I’m just going to take lots of notes and hope for the best. Meanwhile at the Pooh ride, they have announced April 11, 2003 as the official opening date. We began training the new leads this week, and I am sure the ride operators will come soon thereafter. It is weird having a lead around after spending a month and a half on our own.