Back from Northern Cal 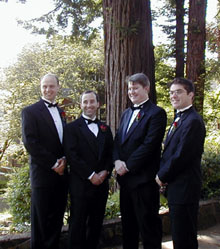 A quick trip up to the Bay Area last weekend for Alex’s wedding provided just what I needed. It was good to see everyone again – even Alex’s parents whom I haven’t seen in almost 10 years. The ceremony was nice and the setting was spectacular. The reception room overlooked San Francisco Bay with a panorama that only can be appreciated this time of year before the summer fog rolls into the Bay. Susie and I carpooled up from LA and Santa Barbara and had a great time. We didn’t set any land speed records, but it seemed like we made excellent time – even showing up early. We took advantage of this and headed over to the Marin Headlands for some photos. We were shocked by Mark’s mustache, but sadly neglected to get any good photos for posterity since he shaved it the very next day.

After the wedding, Susie and I headed over to my aunt and uncle’s place in San Rafael for a quick visit which featured the Vibra 4000 Massager (ok, I don’t know if that is what it is really called but it should be) which turned me to Jello after a few minutes on setting 5. We then had a nice pizza party and root beer taste test upon our return to Wendy and Mice’s condo. It was sort of weird since they live in a condo not too far from one of the places I used to live. They were familiar with some of the stomping grounds, but from an entirely different perspective.

Sunday, after a much needed sleep in, Susie and I headed off to the USGS for a quick two hours. We wish we could have been their sooner, but our bodies wouldn’t allow it. I was feeling kinda worn out from the combo of allergies, the late nights, and the drugs to remedy the allergies (Claritin is non-drowsy only after being in your system a few days – one thing I don’t miss about Nor Cal is the allergies). By the time we headed back to parts south I was already pooped and managed to guzzle a few Cokes to keep me going. The only bad thing is that we had to increase the number of pee stops.

It was a fun weekend and with Monday off, I was ready to head back to work on Tuesday. I did find out that I made trainer at the Matterhorn, and that there even is a chance for more in the near future. Other than that not much excitement except for Lisa Kudrow on the Pooh ride today. That reminds me I did see Kathy Ireland on the Pooh ride a few weeks back. The celebrities are finally making their way to the ride.

The drought is over

Not much going on really