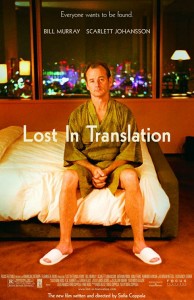 Last night, Daniel and I sat down and watched Lost In Translation. I had heard lots of good things about it and considering we are making a secret trip to the place prominently featured in the film, we thought it would be a good flick to watch to get us prepared.

Honestly, the film isn’t nearly as good as people say it is. I liked it, but it wasn’t one of those “Man this is a great flick” reactions. I really liked Bill Murray and Scarlett Johansson (who gets to have her panty-claded hiney in full cinemascope as the opening titles form under it – kept reminding me of “From Russia With Love, but I digress) – both of whom give such nuance performances that were right on the mark. Let’s be honest, the movie is funny, but it is a character study of two people who are having a miserable time in a VERY foreign place until they happen to run into each other at the Hotel’s bar. I kept telling Daniel don’t expect our hotel to be that luxurious.

The pace of the movie was a bit slow for me. I enjoyed the lavish panoramas and ‘tourist walking around in bewilderment’ scenes, but at certain times in the movies I felt the whole thing come crashing to a grinding halt.

As for the DVD, it includes some nifty stuff like a home movie of behind the scenes of the movie as well as some deleted scenes (which I was glad they deleted), a theatrical trailer, a music video, and an interview with some of the cast and crew.

If you are into character pieces or travel its a must-see, but if you are looking for hilarity then go elsewhere.