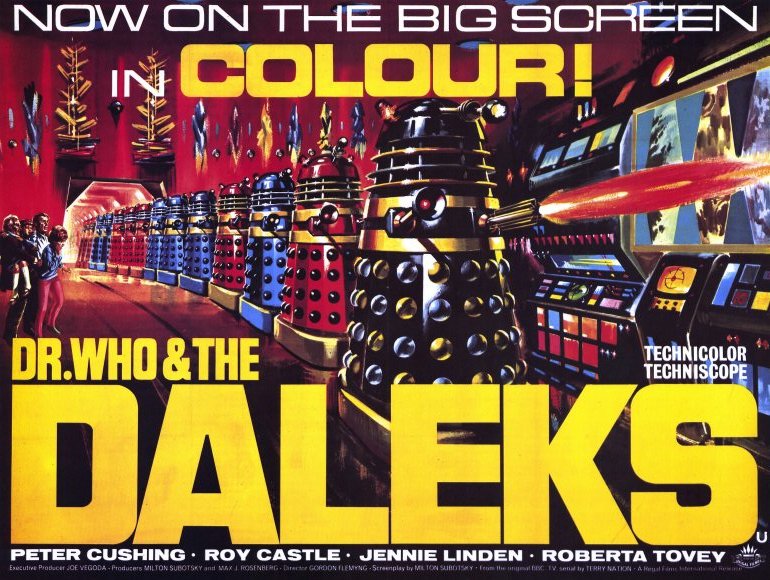 Having seen just about every serial of Doctor Who that exists (still waiting to find a copy of the Tenth Planet), and desperate for new WHO (series 8 doesn’t begin until August), I decided to rent via iTunes the first Doctor Who movie adaptation titled “Dr Who and the Daleks” from 1966. A lot of fans of Doctor Who cannot stand these movies as they wildly re-interpret classic WHO episodes from the First Doctor era. The first movie is based on the second serial of the show called “The Daleks”. The seven part serial written by Terry Nation is thought by many to be the one that really got the show going and saved it from being canceled.

The movie follows the same plot of the original serial, but shortens it for time and completely changes the back story of the characters. The Doctor is now an eccentric inventor called Dr. Who. His granddaughter is still Susan (though she is 12 now). The biggest changes are for Barbara (now Dr. Who’s granddaughter instead of Susan’s teacher) and Ian (now boyfriend of Barbara and a goof instead of down-low squeeze of Barbara and leading man). The characters land on the unnamed planet (which we know is Skaro) and learns about the Daleks and their war with the Thals. Honestly, if the original characters and actors had been in a movie version of the serial with the same length as this movie but with the original music and score, it would have been way, way better.

Despite these changes and missing the original cast, I really got into the story. It was a bit weird seeing the same things but now in technicolor but as a Doctor Who fan, I am used to changes to the characters and just roll with it. It certainly isn’t a masterpiece, but a fun oddity that is good to pop in and watch. I do wish they had kept the TARDIS interior to be more like the original series. I love the TARDIS and to see it a hodge-podge of wires and misc items was a bit painful (even though it makes the ‘invented by an earthling’ a bit more believable – who knows maybe this desktop is saved somewhere).

I hear the second film is not as good as this one, but hey, I am up for the challenge. Look for that review sometime soon.

Did you find the face?