The story so far: Apple releases a new iPhone and me being at the end of my two year cycle and with my camera issues on my iPhone 5, I was ready for a new one. Excited about the 6 and 6 plus, I then struggle for a week trying to decide which one to get.

Friday morning rolls around and I had plans that I was going to get up at 530am and head over to the mall by 6am to guarantee myself a good spot in line. Once my alarm went off, I had other ideas in mind. I decided that I would just go around the time the store opened and take my chances. Last year, I had heard reports that people were able to go into the store after opening and pick up a phone with no issues. So with the weather cool, I headed out the door and arrived at the mall right at 8am. The first thing I noticed was that the parking lot at the Brea Mall was surprisingly full for so early in the day. Second, I noticed the 12 police cars and the HUGE line of people waiting outside.

I parked and headed for the end of the line which was around the side of one of the Macy’s buildings. Immediately, I was thinking this was a bad idea – the line was certainly longer than the last time I waited for a phone back in 2010. I was hopeful that transaction times would improve and I’d be able to avoid staying in line for 7 hours.

The first two hours the line moved pretty fast, and then around the 4th hour the line grinded to a halt as they moved us into switchbacks in the parking lot.

Finally after 7 hours I was inside the cool air conditioned mall (outside temp 91 degrees, I was also getting a nasty sun burn).

Once inside the mall, the line moved fairly quickly – 45 minutes to the front of the Apple store and then 20 minutes to do the trade in for my iPhone 5 and then get my 6 up and running. Inside the store, the helpful Apple person asked if I wanted to at least see the 6 plus even though they did not have one for my carrier. I picked it up and immediately knew I made the right call with my iPhone 6 with 128GB of storage. 128 seems a bit excessive, but since I plan on having the phone for two years, I am planning for the unexpected. 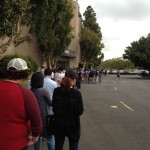 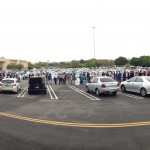 My word that is a huge line!! 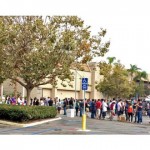 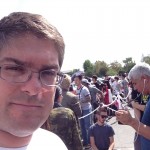 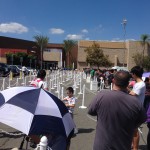 The end of the line is so close. I could have slept in more and still have been close to where I was at.. 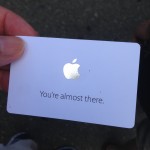 Official recognition that I waited forever 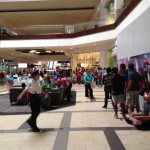 Almost to the front of the line.. 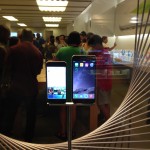 Tease in the window 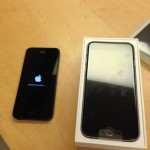 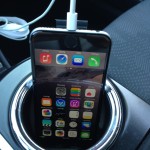 Yay! It fits in the cupholder still!

Despite the waiting and the heat, from my perspective everything went way smoother than before. The biggest challenge was the people who were buying phones with Cash off contract to ship to China. It was like they were hoarding phones and those of us who just wanted a new phone had to suffer and get a sunburn for no reason. Hopefully the next time they will release the phone at the same time in China, and I will just pre-order again and avoid the standby line!

After using my phone for a few hours, I am already used to the bigger screen size, but I haven’t seen anything that wows me – part of that is because I restored my old phone onto my new one, but also I haven’t had a chance to look at all the new features of the phone and iOS 8.