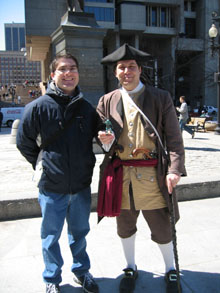 Decided to sleep in a bit since this whole Eastern Time thing really bites. By the time I got out of Nathan’s apartment, it was already 10:30am. I headed down to Boston Common to walk the Freedom Trail – a really cool touristy thing where the city fathers have placed a red line (sometimes painted and sometimes brick) from Boston Common to Bunker Hill past 16 major historical sights. I had planned on just hopping into the visitor center to get a guide map, but there was this guy in period costume that told me that if I hurried, he’d let me join his soon-to-be-departing tour. He seemed to have a good personality (important for a tour guide), so I plunked down the $10 and away we went.

The tour covered the first half of the trail and gave WAY more history than if I was to just read signs and try and stumble around and find things myself. Among the sights: the new State House, Park St Church, Granary Burial Ground – home to patriots like Paul Revere and Samuel Adams, the Old South Meeting House, the Old State House, the site of the Boston Massacre, and then down to Faneuil Hall. From there, I was off on my own to Paul Revere’s house (which I admired from the outside, Old North Church – which is where the famous signal lanterns were hung, the USS Constitution “Old Ironsides”, and the Bunker Hill monument. There is nothing like climbing 294 steps to get to the top of a monument after a 3-mile walk. The view was amazing from the monument – however I think the stairs are worse than the ones at the Duomo in Florence or the Arc de Triomphe in Paris.

After the Freedom Trail, I headed back to Nathan’s via the public transport. Luckily the station nearest to me was the one at the former Fleet Center – home to the Boston Celtics. A quick metro and walk later, I collapsed at Nathan’s and relaxed until he came home from work.

We chatted for a bit then headed on out. We walked to this trendy little restaurant called Flux. I had some great penne pasta with meatballs that was ginormous!. Nathan had a nice steak (thankfully not the steak tar-tar he was telling me a story about. We then headed over to the Club Cafe, where they were playing videos in the back room. Nathan knew a few people there and I had a blast. I will say that I think I had one too many Chambord Martinis. I blame it all on Nathan and the “one for the road” policy. The two of us somehow managed to make it back to his apartment via Taxi. A quick cupcake fix and then the truly surreal night began.

It must have been the alcohol, but all I remember is: Ab Fab, leaving drunk messages, and a faint dream I was throwing up in my sink at home. Sooooooo when I woke up with a headache, I realized it was not a dream, and that I really need to chew my food more. I also discovered my clothes at random spots around Nathan’s living room. Even more to my horror, the water in the apartment was shut off, so there was no way to clean the mess up before Nathan got up. Such bad manners, I am sure I will never be invited back; then again, it might jut be another great memory we’ll have years to come.

Anyways, besides having too much booze, things are going great and I am having a blast. Day 3 looks like it will be low key since we are waiting for the water to come back. We will be heading off to Plymouth and maybe Salem. If we run out of time, then we will hit Salem on Sunday on our way to Maine (which is actually only an hour or so away – everything is so close here!)