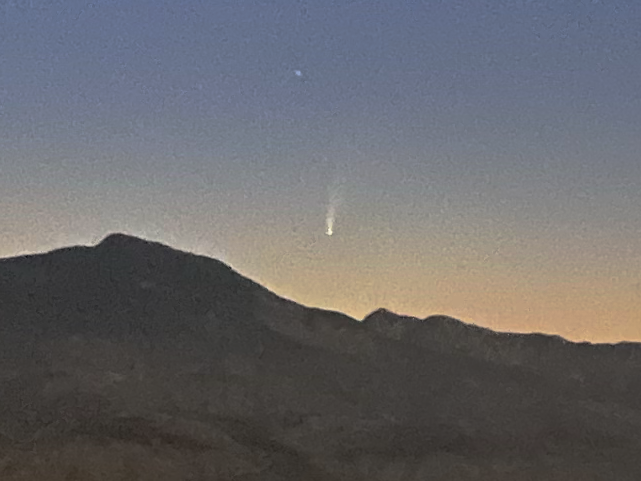 On Monday morning (July 6), Daniel and I escaped our apartment to go see if we could spot the recently discovered comet – NEOWISE aka C2020F3. The comet was discovered back in March and over the weekend, I became aware of it and how bright it was going to be. Of course there is a downside to everything, and currently the comet is only visible during a short pre-dawn window.

Later in the month, the comet will move to the evening sky but not wanting to risk it getting less bright, we decided to make a run to a dark sky area. Now in Southern California, that means desert, but not wanting to drive hours we headed for a spot that we have previously visited during the many Perseid Meteor Shower observations we have done. Near Banning, California, this spot had the advantage of a clear shot to the Northeast sky where the comet was located. We arrived around 425am and Daniel quickly spotted the comet rising above the mountains.

The comet was visible to the naked eye, but I do wish we had binoculars to get a clearer view. I managed to get a couple of good shots with my iPhone 11 Pro Max and Daniel was able to get some stunning shots with his Nikon DSLR. My Canon point and shoot just got me a bunch of blurry photos – even with the tripod. Basically, the only thing I was able to get a good shot with it was the full-ish moon.

Next time we will try and get more sleep and arrive earlier to set up and get some more photos. The comet was only visible for about 20 minutes tops and peak photos were right at the beginning of the window. Not wanting to miss out, I ordered some binoculars with a tripod mount so hopefully when the comet comes out in the evening we will try again to get some better shots.