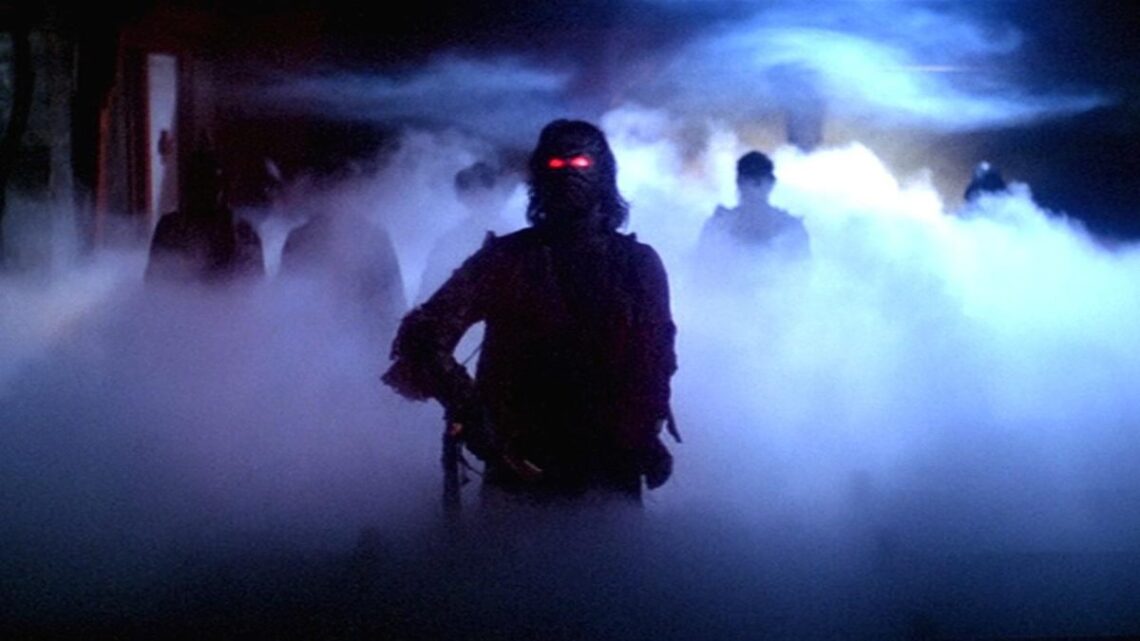 Ninth in the series of the self-isolation media consumption catch up.

Our Zoom movies have continued over the past couple of months – I am so happy we have committed to the movies each week. Sometimes we rant about what is also happening in the real world, but I do enjoy the movies and the time spent together. For Halloween night we even dressed up. I was a cheerleader and Daniel was a skeleton scarecrow.

Here is the list of movies we have seen since September’s Friday the 13th Part 2:

The Fog (1981) – As mentioned previously, I was looking forward to this movie as I hadn’t seen it since I graduated high school. I really like John Carpenter’s cinematic style and while The Fog overall isn’t intense, it has some very scary thrilling scenes. Bonus points for Jamie Lee Curtis appearing with her mom, Janet Leigh. And who can forget Adrienne Barbeau as the KAB disc jockey! So many classic moments.

House (1985) – We finally got around to watching the movie that Tara originally wanted to watch back in the beginning of the pandemic. Honestly, not my favorite as it felt like it was trying too hard to be funny. It actually felt more like an NBC movie of the week with all of the actors from the Thursday Night lineup in the 80s. A couple of chuckles here and there, but my warped sense of humor prefers the Japanese movie.

A Nightmare on Elm Street (1984) – We had seen Halloween and Friday the 13th so we decided to revisit another of the pillars of the 70s/80s horror movies and watch Nightmare. It’s a great movie with some good scares and if you haven’t seen it I am not sure why. I know I have seen a few of the sequels, but none of them are currently on our list. I am more interested in learning about Michael Myers and Jason Voorhees.

Chopping Mall aka Killbots (1986) – At this point in our rewatch, Daniel made a list of movies as part of our group homework to come up with movies to watch. We then had Tara put them in a randomizer and that set our movie list for the last week of September and the rest of October. This was an OK movie, basically a mall is tired of paying people for security so it invests in some robots who after a lighting strike decide to not just arrest people who are trespassing, but kill them as well. A lot of mall nostalgia from the 80s and some unconvincing robots that are totally 80s.

The Birds (1963) – This was my choice, I figured we should watch at least one classic movie. While not my favorite Hitchcock movie, the Birds is still so, so good. Even the dated practical effects still hold up well and I love seeing the areas of San Francisco and Bodega Bay as they looked in the 1960s. Great acting and I hope I can convince the group to watch another classic horror/thriller movie.

The Stuff (1985) – Back to the 80s cheesy movies and this one takes the cake (or rather The Stuff). The plot revolves around goo that comes up from the ground and tastes so so good that everyone can’t get enough. Of course there are consequences that are not very good. I can recommend this one if you are looking for a fun dumb movie.

Night of the Comet (1984) – Hard for me to pick a movie I had only seen once that made more of an impact on my than this one. I always remember the plot of the movie – people gather to watch a Comet pass by and most of them turn to dust save for a few survivors including Chakotay (aka Mr Robert Beltran channeling his best Erik Estrada) and the girl who was banging the projectionist in the movie theater. It kind of falls off the rails towards the end with some weird sub plot about a group of scientists in a bunker, but overall still fun.

The Thing (1982) – John Carpenter is back in this remake of a 1951 movie and does the “scientists trapped at the south pole with aliens who threaten them” plot good service. There are some genuinely scary and thrilling moments (and some gross ones). Kurt Russell is great in this and not having seen Escape from NY in a long time, I am curious if he actually plays the same type of character in that one too. Bonus points for Wilford Brimley and Richard Dysart.

Halloween H20: 20 Years Later (1998) – I was excited to get back to the Halloween franchise and skipping Halloween 3 (no Michael Myers) and 4/5 which I’ve been told are not that good, we landed on H20 which is very similar in premise as Halloween (2018) we watched earlier this summer. It is a very interesting comparison between these two movies as we see Jaime Lee Curtis’ Laurie as the mom who is just falling apart but manages to make it to the end and do some real damage vs the Grandma badass. Honestly, the 2018 movie was far superior and I really liked her performance better in that movie. This one does get bonus points for Janet Leigh popping up again with her daughter, but minus points for a Michael Myers who looks like he’s having mask issues. Didn’t really care for any of the supporting actors either and I couldn’t wait for them to get chopped up. We were intrigued enough that we have added the sequel, Halloween Resurrection to our list of upcoming movies because Windy tells us its important to understanding this one.

That’s it for now. We have our November and December movies picked out with one open week so if you have a suggestion, let me know!