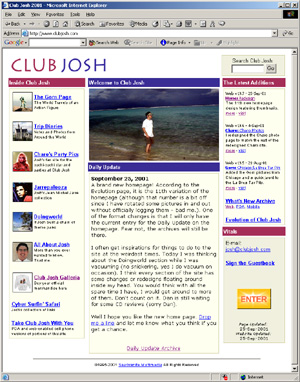 20 years ago today, in the height of the Dot Com era, I decided to add a daily weblog to the site to document a year in my life. Originally it was going to be links here and there with links to new stuff on Club Josh and links to other stuff on the Internet. The first few months were fast and furious with regular posts.

Over the years, updates slowed to a crawl as we navigated life changes, server issues, and a general lack of direction. Originally, the Daily Update was a simple HTML file. It soon became server side includes that published to a PDA and Mobile site before finally being published by Movable Type and eventually WordPress. I think the name “Daily Update” became more of a sarcastic title than an informational one. It’s a shame because other blogs that started around the same time went on to make millions.

Despite the infrequent posts, I am glad I still do life updates every once in a while. While I doubt anyone is super interested in them, I am glad I have journaled some of the biggest events that have happened from the contested 2000 Presidential Election, the opening of Disney California Adventure and the September 11, 2001 terror attacks all the way to the Covid-19 Pandemic in progress around the world.

Not sure what the future holds as the web gets weirder and weirder and my interest in posting is full of caution. I can foresee maintaining the current infrequent updates as well as potentially putting the Daily Update behind a password. I haven’t really thought about it, but I should probably decide one way or another. Also on my mind, maybe it’s time to change the name of the blog portion of the site? It’s never to late to try something new – but then again it’s a brand..

Club Josh ambles on 25 years and counting and “Daily” Updates for 20.